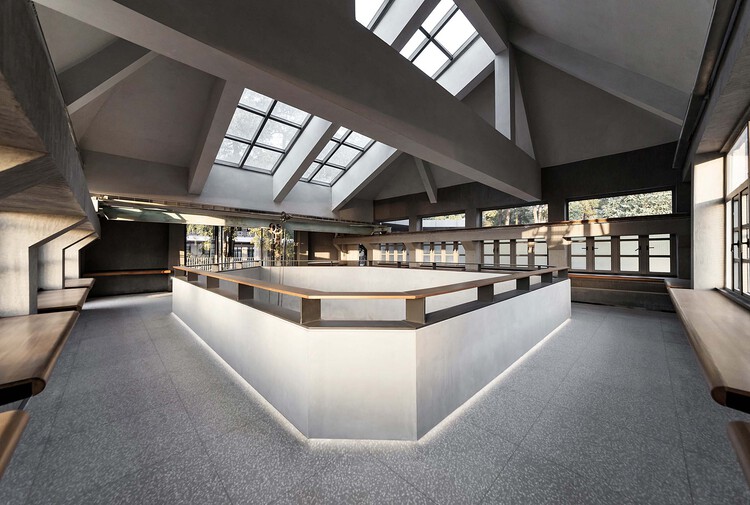 Text description of the architects. Located on the west coast of Kulangsu Island, Luchao Kulangsu Art Park was formerly the Kulangsu campus of Fuzhou University’s Xiamen Academy of Art and Design, which was known as the “Huangpu Military Academy (formerly the outstanding military school in China) of Fujian Fine Arts” In July 2017, Kulangsu was declared a World Heritage Site with the glory of “Historical International Settlement”. Once known as the “Cradle of Modern Chinese Education”, the art island once again attracted the world’s attention. It was just the time for Xiamen Art Park Luchao Kulangsu to undertake the mission of “bringing culture back to Kulangsu and reshaping Kulangsu with art”.

The “KAP Gallery” was built in 1986 and used to be the sculpture studio of the Academy of Arts and Design. Once the park has been redesigned, it will be used as an independent, multifunctional art space and operated continuously. The entire transformation follows the aesthetic paradigm of the rough architecture of the 1980s, preserving the original texture and continuing the signs of age, allowing new memories to grow in the “shell” of the old building.

The exposed supporting structure and the wedge angles inside the building have been preserved little by little and point to the earlier traces of life in the “Streamer Hall”. The walls were only applied with simple cement texture paint, to restore the building’s original appearance, can form tension in the field, and achieve a pure and simple aesthetic feeling.

In the exhibition rooms on the second to third floors, the team is expanding the originally narrow maintenance route to meet the traffic requirements during the exhibition. The regular body blocks of the corridor facade are interspersed and interact to form a unified internal ambient language that creates a visitor experience with a sense of order and ceremony. Wide and thick corridor handrails and exhibition booths embedded in the structural pillars are clad in warm wood. Using careful and subtle intervention techniques, visitors will have an intimate sensory experience in the process of walking, observing, and resting.

The light wanders haphazardly through the tall building and the transformation emphasizes the level, texture and texture, giving the building a poetic quality of not being explicit but encompassing and telling the story of constant change. The slide rail device at the top of the plaza, originally used to transport large stone sculptures, remains for its historical value, with mottled rust to remind people of the passage of time. The still restored ornamental glass windows, the terrazzo floor with signs of age and the plastered corner lines on the ceiling are evidence of the architectural design details of decades ago.

The window lattice stands still and light and shadow flow. Alternating functions and aesthetics, the team traces the origin of the building through design. It awakens memories between preservation and discarding, then develops history and writes the present. Through restrained and rational design, the building completes its transition between old and new time and space, going from the past to new life.