“So how is this supposed to work?” Those words have been uttered many times this season by many different people The Bachelorette, all trying to figure out how ABC’s reality romance franchise will manage to have two stars for the first time ever. Well, now that we’re three weeks into the season, we can say with certainty that it is Not To work. At all.

This season’s two stars, Gabby and Rachel, have already been turned on by the emotional wringer The bachelor, forced into an unprecedented love rectangle when Clayton told both of them, and eventual winner Susie, that he was falling in love with her. (Yes, all three.) After being treated so badly by Clayton, these two women deserve a real opportunity to meet the man of their dreams, so we were glad they were named as the next Bachelorettes. But instead, they are pitted against each other in a gruesome twist that managed to humiliate them once again.

Gabby and Rachel are headlining together this season, choosing from the same pool of 32 men, and early on everyone played nice and said the right things. But, of course, some men have maintained relationships with both women, even kissed them, and conflicts begin to bubble up. Several guys have told a girl they’re more interested in the other — and not all of them put it in the best way. Hayden decided to tell Gabby that she was too “rough around the edges” for some reason, though he could very easily have shut up. A wounded Gabby didn’t give out a rose at all at that group date, and host Jesse Palmer had to step in and chide the boys, telling them the women would be looking for love separately from now on. 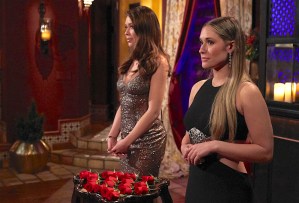 That led to this week’s truly bizarre and deeply awkward train wreck of a rose ceremony, in which Gabby and Rachel took turns offering a rose to a man of their choice … and giving that man a chance to decline that rose in favor of one of the other women. And if he did, the first wife would lose that rose and couldn’t give it to anyone else! What?! Who thought that was a good idea? Rachel lost a total of three roses by choosing guys who favored Gabby. Three! And one of them was for a guy named Meatball! meatballs!

What was supposed to be a celebratory girl power season has turned into an emotionally tense sobfest. Both Gabby and Rachel were in tears for the first three episodes, doubting themselves, comparing themselves unfavorably and feeling like they weren’t good enough – this is how the star of this show should never feel! (Do we really need to say that?) They were meant to feel like the stars of their own fairy tale, but instead they’ve been made to look like fools.

It’s the producers’ fault, of course. They were clearly trying to shake that up Bachelors/ette Formula – which, to be fair, has become a bit stale after two decades in the air – by giving us two stars this season instead of just one. (And they’re probably hoping all the controversy will only lead to higher ratings.) But in a show that’s always had to balance authentic romance with artificial drama, this twist decisively tipped the scales toward the latter. There’s also a vaguely misogynist vibe to the whole thing: would they ever dare try that twist with two men? Or is it just “more fun” to grapple with women’s feelings like this?

It’s a shame because Gabby and Rachel are both personable and outspoken women who would make great bachelorettes on their own. At least they’ll get their own separate trips from now on — but the shift’s too short, too late. The damage is already done. (And based on the trailer, the drama isn’t even over, as at least one guy is regretting his decision and pining for the other woman.) We realize that Gabby and Rachel were never guaranteed happy endings; the track record for a lasting romance on the Bachelor Franchise isn’t that great. But they at least deserve a better chance than this.

Okay, Bachelor Nation, It’s Your Turn: How Do You View Gabby and Rachel’s Season So Far? Click on the comments and make your voice heard.