LONG Island Medium Theresa Caputo has sported a different hairstyle and the fans all love it.

Theresa posted photos of her new hair on her Instagram page.

The 55-year-old debuted her new look during a trip to Italy with her son Larry Jr. and his girlfriend.

The first photo shows the three in front of a statue in the town of Menaggio on the western shore of Lake Como.

Fans did a double-take to find out which blonde in the photo is Theresa.

Her platinum blonde tresses were smoothed half up, half down, without their signature bouffant. 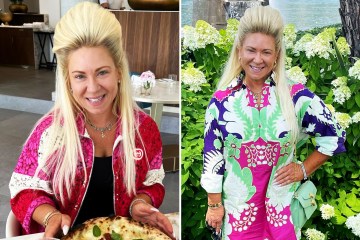 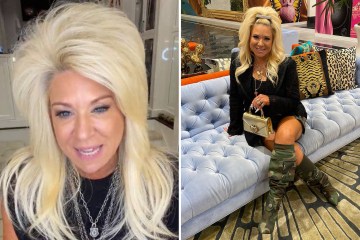 A fourth photo in the series shows the medium wearing her hair half up, half down, with her hair voluminous.

Fans all agreed that they loved seeing her without her signature teased hair.

“I love your hair so loose!!” wrote one fan.

Another wrote: “I know your pouf is your signature… but it looks really pretty on you! Very youthful!”

Another fan agreed: “You look like his sister instead of his mother! You look so young with your hair.”

A fourth fan said: “Your hair looks so much better in its natural state. You look 20 years younger!”

Theresa has been experimenting with a variety of hairstyles lately.

The TV star showcased some of her new looks ahead of some live shows last spring.

In one post, her hair was half up, half down and curled.

The blonde hair lay on her shoulders while the bodice was held back with a silver clip.

This hairstyle differs from her original where her bangs are usually parted on the right.

During an Instagram Live, she sported a similar hairstyle, with the bangs pulled back but no clip.

In recent months, she’s added a poof to her hair that fans refer to as her mullet look.

In addition to their hairstyles, fans keep commenting on how the medium ages gracefully.

Earlier this month, Theresa showed off her legs in a glittery skirt while celebrating 10 years of her show.

Fans thought she looked decades younger and loved her outfit too.

“You look wonderful! And so young!!!!!” commented one fan.

“You look incredibly beautiful,” said another.

Theresa welcomed her first grandchild on February 22nd and has been keeping fans updated ever since.

Shortly after the baby was born, Theresa’s daughter Victoria shared the first video of her newborn daughter Michelina Rose with her husband Michael Mastrandrea.

Theresa shared several sweet photos of herself while holding her newborn granddaughter.

In one, the reality star sat on a white sofa and hugged the sleepy little one with both arms.

The little baby was wearing an adorable romper and had on tiny pink socks and red and white balloons were planted next to them in the corner.

The TV personality planted a kiss on the little tot’s forehead.