DUGGAR fans have poked fun at the “aggressive” name given to their newborn son by John-David Duggar and wife Abbie Burnett’s sister-in-law.

Sarah also explained the meaning behind Wilberforce, referred to as the “bright fortress.”

The newborn baby is “named for William Wilberforce, who fought for justice and truth and saw the abolition of slavery in his day (and in recognition of the fall of Roe v Wade).”

In one of the photos, Nathaniel slept in his mother’s arms while he posed with the rest of his family. 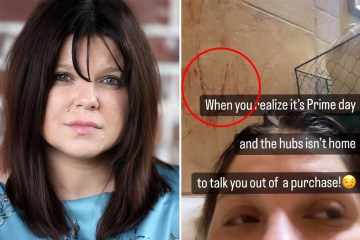 In the Instagram story, Sarah filmed her little boy as he closed his eyes and continued to snooze.

She captioned the post, “I could watch little babies sleep all day.”

Sarah is married to John-Clay and has three sons: Eric (seven), Samuel (six) and Joseph (four).

John and his wife are the parents of their two-year-old daughter, Grace.

Counting On fans jumped to an online thread mocking the middle name Wilberforce.

One reviewer said: “That sure is still weird! If the child’s name was Jack or something very ordinary, then maybe. But Wilberforce is a CHOICE.”

Another reviewer said: “This is the first time my brain has read that name as anything other than Wilberforth. Surprisingly, that’s worse.”

One commenter chimed in: “If I had a nickel for every time I had a nephew named Wilberforce, I’d have two nickels! Which isn’t much, but it’s weird that it happened twice.”

Abbie recently shared a rare photo of her baby bump.

In the tender photo, the pair wore matching blue outfits as they embraced on the beach.

John-David wrapped his arms around Abbie as he stood behind her.

He gently placed his hands on her baby bump.

They captioned the post, “My favorite place is in your arms!”

In a previous Instagram post, John-David and Abbie announced that their baby boy will be due sometime in late summer.

Followers sent their congratulations in the comments, leaving friendly remarks for the couple who are expecting their second child.