Since most people work for someone, they have to do what they say because managers have the right to make decisions. They must obey even if they think the command makes no sense and will not bring anything good.

In some cases the boss may not really know what they are doing, but other times the employee may not see the bigger picture and simply not understand how a seemingly useless task can impact the company as a whole.

One such employee came to the conclusion five years later that a report they had put a lot of effort into and later ignored actually had meaning and malicious compliance was involved.

5 years after leaving the company, it dawns on this accountant that his boss has been using him to maliciously comply with the owner’s wishes

About half a decade ago, the Original Poster (OP) worked in a small sawmill as an office clerk, also known as an accountant. His direct superior was the general manager, but the owner was also very involved in the business despite his 90 years of age.

The OP described the owner as a smart guy with 60+ years of experience. So when he started asking why the mill wasn’t making enough profit, the accountant believed the owner was right, that it had more potential.

To find out what they were doing wrong that was preventing them from earning more, the owner decided to hire an outside consultant. The consultant was also an experienced mill owner, but his only suggestion was to work longer hours, believing it would increase productivity but not cause a loss of money.

This theory needed to be theoretically tested, so the manager asked the accountant to calculate the profit if the mill worked overtime. The OP made a serious effort to do the report which took several hours because he wanted to make sure he was getting it right.

The OP worked for a lumber mill that the owner said wasn’t doing as well as it could have been, so he decided to hire a consultant 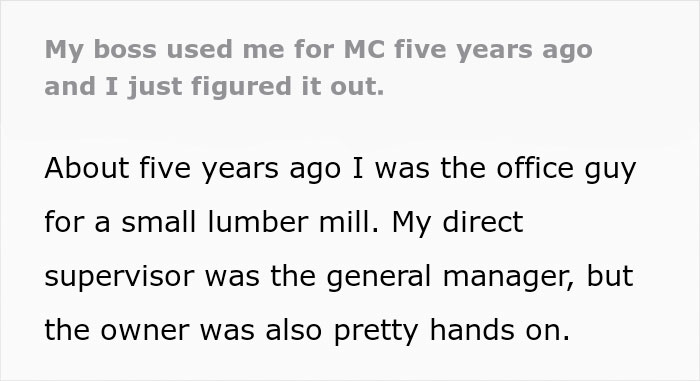 It turned out that the analysis showed that overtime would cost more money than it made, but to OP’s surprise, his boss announced that they would follow the consultant’s advice.

The accountant’s prediction came true and at the end of the two week period he prepared the financial statements and they showed that the new strategy was not paying off and the company had indeed suffered a fairly large loss.

The consultant was convinced that overtime would fix the problem, so OP’s line manager asked him to do a report on it 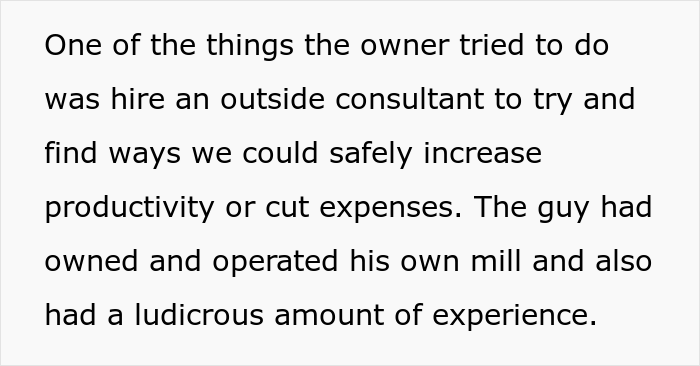 What bothered the OP was that he already knew the result, he warned his manager about it, but his work was disregarded as was the time he put into processing the data.

In the comments, the Redditor said that in the past, his input was actually valued and taken into account when making very important decisions, so he long resented his boss for not trusting him at the time.

The report indicated that the mill would lose money, but the owner wanted to try despite the unfavorable report 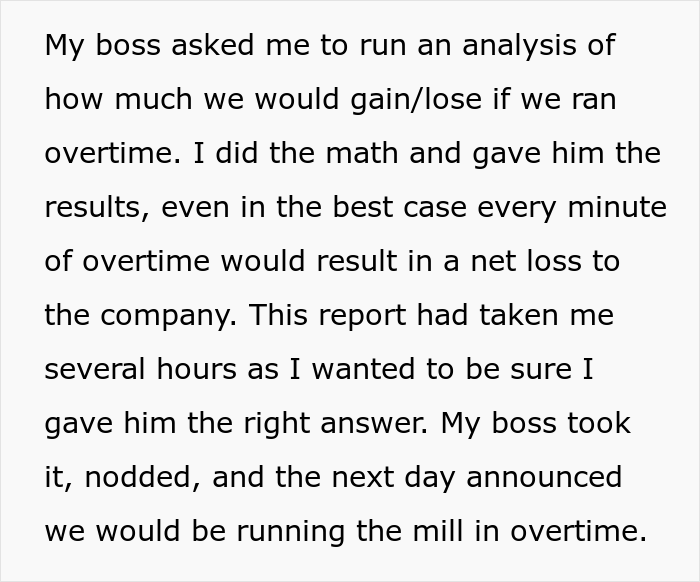 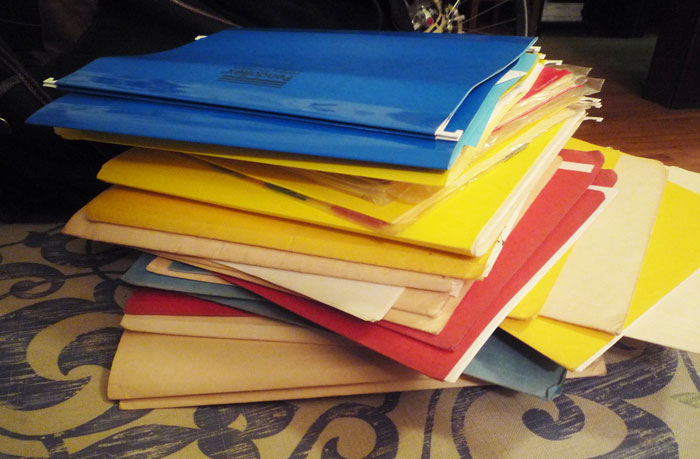 This could have been the story of an employee venting that his boss doesn’t value him and wasting his time on meaningless tasks. And it was until recently that the employee retold the story to someone and it clicked now that they have more experience and the benefit of the time perspective.

He now realizes that the situation was probably not as he saw it then. He now believes that the general manager interfered with the adviser’s proposal as he didn’t think it would result in more money, but he had to listen to him as it was the owner’s idea to hire him.

Time proved the accountant right, but he didn’t understand why his data wasn’t accounted for, making him feel undervalued 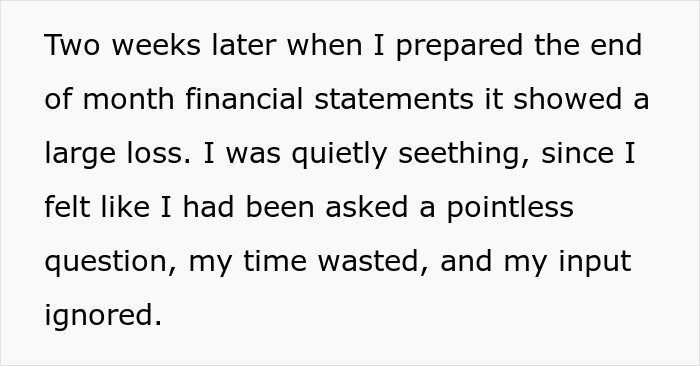 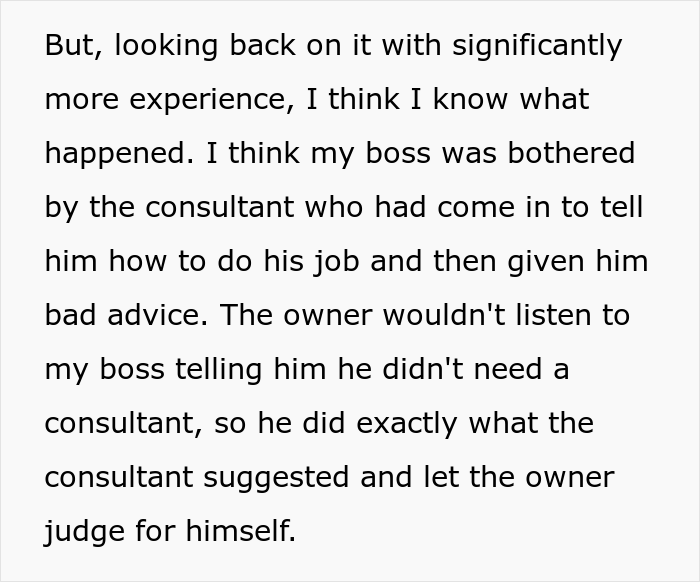 So the General Manager decided to follow the owner’s wishes, but before that he asked the OP for a report to make sure the loss wouldn’t end the business.

The OP feels bad for getting angry with his boss and feels like he should have asked him for an explanation, or should have realized what his boss was trying to do back then.

On the other hand, many people in the comments believed that the boss should have let the OP in on his thought process because it lowers morale and can make an employee feel less valued and motivated to do good things in the future.

In hindsight, the OP realizes that his supervisor probably couldn’t convince the owner not to take the risk, so he maliciously caved in

In the comments, the accountant speculated that the owner wanted to listen to the advisor because the strategy worked for him and he respected the former competitor who was successful in his business.

The only outcome known to the OP is that the owner stopped using the consultant’s services. He also explained what was the real reason the plant was not making the expected profits: “We had too many people repeating the same task on the line. We had to spread people out more to use them more efficiently. We also had some older equipment that prevented us from being comparable to most modern mills.”

But just in case, he asked the accountant for a report to ensure that the loss would not harm the mill 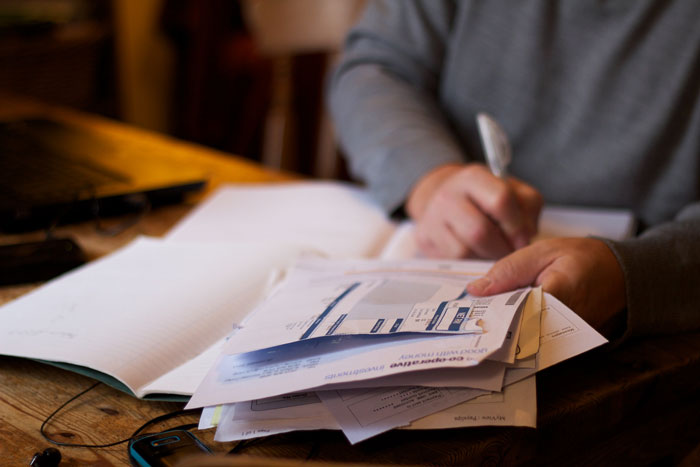 The message most people took away from reading this story was that your boss probably has a boss who has the final say, and they may have their own reasons that they don’t necessarily need to disclose.

Others were genuinely surprised that the general manager chose to remain silent about their real reasons, but as the OP explained, “It was probably safer if he didn’t tell everyone involved that he knew we were going to put the money on it.” to lose.”

What do you think about this situation? Has it made you reconsider your own experiences? Let us know in the comments!